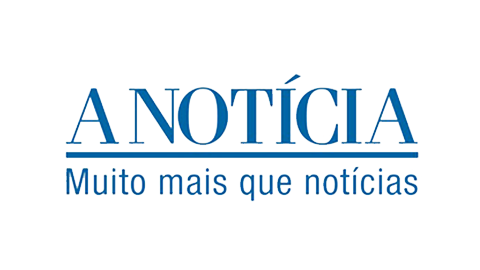 A Notícia is the main newspaper of Joinville serving the city’s population of nearly 600,000 residents. In the January 5th, 2017 edition of the paper, Rice Farming TV and I made the cover!

Here is the English translation of the article written by reporter Cláudia Morriensen:

Californian in Love with Joinville Records City Scenes on Video

Matthew Sligar comes to town on vacation and is a success with images posted on social media.

“I think the people of Joinville love their city. So when an outsider praises it, they become very happy,” says Matthew Sligar, 34.

When he walks the streets of Joinville, Matthew does not draw much attention and easily passes as a native. Because he is of German descent, it would not be surprising if his ancestors had immigrated to the South of Brazil. However he is the first among his relatives to visit Joinville and to fall in love with the city. 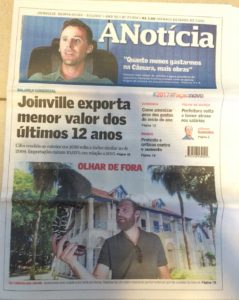 This admiration took the form of a video, which was posted on social media and quickly became popular among the residents [of Joinville]. Under the gaze of Matthew, who is Californian, the streets and most common sights of the city are shown with novelty and freshness in “This is Joinville”, which was shared more than 600 times after its publication three weeks ago.

Married to a Joinvilense, Matthew visited Joinville for the first time in 2010 and, since 2013, comes to spend his [winter vacations in summertime Brazil]. Being a farmer in northern California with a vast history of world travel, he did not know anything about Brazil until he got here – and he was surprised.

“I am a third generation rice farmer. In November the harvest is over and it is very cold. In the past my parents planned trips during this time. Now I do the same except that we always visit Brazil,” he says.

In Joinville Matthew’s first impression was the connection between land, sea and city, which can be confirmed when climbing up to the city’s vista-point. Although he enjoys filming the beautiful places of the city, there are two other elements that charm him: the history and the local community.

“The first time I visited Joinville, a neighbor of my in-laws spoke to me in Portuguese asking for the newspaper. I did not understand Portuguese at all, and as soon as she realized this, she started speaking German,” he recalls.

When he decided to learn Portuguese, he received his first lesson in history. The Californian was taken by his private teacher to visit the National Museum of Immigration and Colonization. There he learned the story of the prince of Joinville, François Ferdinand who, after marrying the Brazilian princess Francisca Carolina, inherited these lands and then sold them to a colonizing company.

The museum, as well as Palmeiras [Palm] Street, are two of the city’s most famous tourist attractions. They seem trivial to the locals, but they are Matthew’s favorite places.

“My mother left Germany when she was a child, but German culture was always included in our home. I really enjoy seeing it in Joinville, particulary in the architecture of the houses,” he says.

Some of Matthew’s defining experiences came out of spontaneity. For example, after visiting his in-laws’ clothing factory, Matthew decided to use his vacation time learning how to sew with factory workers. Another time he drove, with no destination, onto the Rodovia do Arroz [Rice Road] and entered the first farm with an open gate. There he spent the day learning the process of planting and harvesting rice in Joinville versus rice in California.

“I’ve always been well treated by everyone here, and I think that’s why I like it so much. It’s the people who make a city,” reflects Matthew.

The Rice Farming TV channel was created in August 2016, showing the life and work on a rice farm. While he is on vacation, Matthew has decided to continue the episodes by presenting Joinville and the beaches of San Francisco do Sul.

Watch Episode 18 – This is Joinville, Brazil:

The exposure and attention that this video received from A Notícia and the people of Joinville has left me even more in love with the city. Everyone has been so positive and supportive of this video, and I can’t express how thankful I am.

Back to Rice Farming TV in the Press.